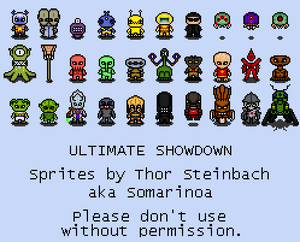 Amalgam Online is the title of a secondary project based on the design of Ultimate Showdown. Originally named Galaxy Online, it follows a similar strategy as Ultimate Showdown itself; however instead of being based around media characters fighting in a massive duel to the death it is based around the very large number of extraterrestrial species found in various media, including aliens rumored to actually exist.

For the timeline presented in the game, see Amalgamated Timeline.

Somarinoa has always found the numerous movies involving extraterrestrial life to be a bit flawed, specifically due to the copyrights of all individual companies: He believes that the universe and, in fact, just the galaxy is big enough to support all species created in our media, and it has always bothered him that there would never be an opportunity to see this concept in action. Eventually, with the apparent success of Ultimate Showdown, he decided to finally bring this idea to light, and begun work on Amalgam Online.

Hundreds of planets are able to be visited and at least partially explored during the course of the game, many of which have areas that can be visited by any level character, thereby greatly expanding replay value as no character absolutely needs to follow the same quest lines. Another unique option in Amalgam Online involving the planets is that each world has at least 2 names, which can, at the player's leisure, be changed via a drop-down menu while in orbit over any world. This is explained as being "individual preference" set on the player's personal starship, and the name chosen will be what is displayed for them not only when above the planet itself but also will replace any reference to the planet by name in any text in the game. Examples of this would be Earth (which has the option to also be called Terra, Gaia or Sol III), Mon Calamari (Mon Cal, Mon Cala, Calamari, Dac, Daca II, Calamari II, or Mon Calamari II), or Omicron Persei VIII (Omicron Persei 8).

Both media-based worlds and original worlds are featured, and each playable race generally starts off on their own homeworld when a new character is created, though some are able to start in other locations, as well. While the starting planet generally does not affect the player character outside of initial quest lines given, the Human race is greatly affected by this; for instance, Martian Humans are slightly taller and thinner than Earthling Humans due to the different gravity settings they were born into.

Community content is available under CC-BY-SA unless otherwise noted.
Advertisement